Due to work commitments I really haven’t had any opportunity to get too my local lake this season.

I have only managed two trips, blanking on the first attempt, and loosing a fish right at the net last time I was here. 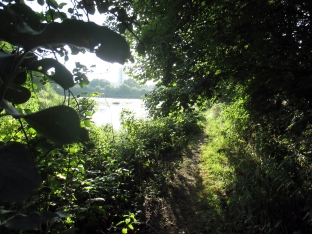 Arriving around 06:00 I found the lake deserted. A perfect Carp Fishers dawn (Although I was really fishing for a good Tench). Fishing a single grain of corn, around one rod length from the bank. I’m not sure if my line was sitting properly, because after a short period it seemed to spook two fish that were in the swim. This is easily identifiable by a sudden underwater earthquake, followed by huge concentric ripples on the surface and more often than not, your float sitting motionless.

Non-the-less I persevered, and after about an hour the lake seemed to lift once more, but this time the Aerial reel ‘sang’. I teased the fish down the lake a little into open water as there were many snags near to where I was, steering it away from a huge reed bed where I was fishing. The fish made open water and battled well. run after run it made and when it rolled on the surface, turned out to be a good mirror carp. This was to be the only view I would get.  As it powered down again it snapped the line. Darn it!

I re-tackled with a grain of corn. re-cast, poured some tea and settled back down.

After some time the reel once again sprang into life, and the vintage rod bent over. Again after an arm-wrenching , rod creaking scrap, I eventually won the day.

What a cracking morning. The only thing to better it would have been if the Carp had been a Tench. Never mind, there is always next time.

Another trip to my local lake today. I fished only maybe2-3 rod lengths out but nothing was happening. One of those times when you know you need to move swims.

Moving down two swims I recast a single grain of corn a short distance, just beyond some aging rushes, scattered a handful of corn on top of my float, poured another cup of tea from my flask and sat back to relax.

With no signs of a fish feeding, my rod bucked violently in the rod rest, followed immediately by the reel screaming! At first I thought that I had hooked a really big Tench. However, when I saw it roll on the surface it was evident it was a Mirror Carp. It did fight like a Tench though, making many powerful surges towards every snag in the area. First it dived left, straight underneath all the rushes which I thought that would be it, as I was only using 5lb breaking strain hook length. Luckily for me, it swam straight out the other side and I was able to guide it back in  front of me and get some sort of control. Making yet more powerful runs toward the rushes a number of swims to my right, I was just able to stop it. Trying to constantly gain line, it would be off again. Soon I got it close, but then it saw the small patch of Lillie’s to my right which it made a direct beeline for, and found. Drat! stuck. I let the line go slack and it freed itself, again out into the middle of the lake only to dive straight back into the Lillie’s when I got it closer. This battle of too-ing and fro-ing went on for some time until I eventually got my net under it. I could not believe when I tried to lift it, it was a really good double , at least 15lb’s. Infact, it was so big, I could not take a proper picture of it in the net. I tried to capture its huge paddle-like tail, but simply could not get it in the picture. Furthermore, it was quite lively on the bank, so after a quick snap, I returned it straight away.

Well, is Autumn around the corner? I was out fishing yesterday in what felt like a force 9 gale, normally very difficult using a centre pin reel. Non-the-less, I was there at the lake. I had four cracking runs, three of which I am sure were Tench, loosing every single one with bent hooks. Finally I landed a Bream. It would be fair to say that I won’t be using those hooks again, and I made a trip to my tackle shop to purchase more suitable hooks for the fish I am looking for.

Picture of a small Damsel fly

This morning the wind was still high, but it was a warm morning, so I had to go fishing. Armed with my new hooks I was determined not to be broken today. Unusually, I had left the centre pin at home and had filled my old Hardy Altex with 6lb monofilament and my Sealey ‘Heavy Ledger’ rod. I have never used a fixed spool for years so it took a little getting used to again. However, it proved the right choice for the day as it was much easier casting into a wind.

Fishing as usual the ‘lift method’ with corn as bait. I fished relatively close in again but did not have any action until around 10:30 when the float bobbed and shot away. Lifting the rod gently I had a scrap of a good five minutes to reveal a lovely Tench, they might be small but fantastic sport. Quickly unhooked and a snap taken I returned this cracking fish in order that it may enjoy the rest of its Sunday morning in peace.

About an hour later, again the float shot away. Again I was sure I was into another Tench but when I got it nearer it revealed to be a mirror Carp. Again, what a scrap. It must have only been around 4lb’s but it took me ages to get it in and net it. I didn’t photograph this chap as it was as lively on the bank as it was in the water so after unhooking it I returned it immediately and it shot off in an explosion of spray discussed at being disturbed on such a nice morning.

As the sun grew even warmer the dragon flies put in an appearance, I watched in amazement at their aggressive aerial battles, each defending their own territory. I was also treated to the aerial displays of the House Martin’s that swoop down to the lake from the farmers dilapidated farm buildings close by. It always puzzles me how they never crash into one another?

Another glorious, unscheduled trip to Wessex.

Hurriedly packed the car on a Monday morning and I was off. Arrived late Monday night in order to fish my lake early Tuesday morning.

Woke up at 05:30 to leaden sky’s and torrential rain. Needless to say I did not rush out too the lake. Instead I had a spot of breakfast with a pot of tea. Around 09:00 the sky’s cleared enough for me to gain enthusiasm again to get fishing. Had a lovely morning and fished until lunch catching 4 cracking Roach in the process. And I saw a Kingfisher this morning

That evening I was kindly invited by friends to fish a small commercial fishery that I know well now.  My intention was to catch my first Carp from the surface of the season.

I had brought along with me on this trip a surprise for everyone as I had packed a pot of my ‘July Jam’ and a couple of bottles of Elderflower Champagne. I had also bought some fresh scones and a pot of the finest clotted cream, so we had a proper cream tea before the fishing began in earnest

I was very fortunate to land this double figure mirror, not the prettiest of fish but it went like fury. We fished on until after midnight and saw many shooting stars as it was very clear sky that night.

The following day saw me back at my lake.  It was amazing the amount of ‘champagne’ bubbles round my float, classic Tench, but all I kept hooking were Roach.  Although I have never experienced a Roach that ‘ran’ great fights they put up in shallow water. By lunchtime I had caught 5 in total, what a great morning.

That evening I took up the kind offer by some friends to join them at a free stretch of river to go Barbel hunting. We had a great time although non of us caught, maybe next time… 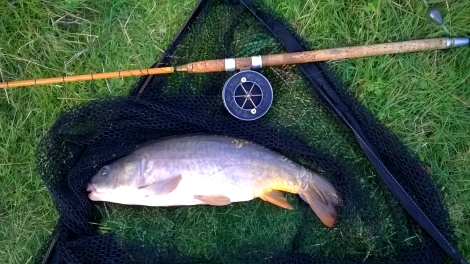 The Wonder of the World, The Beauty and the Power, The Shapes of Things, Their Colours Lights and Shades, These I Saw, Look Ye Also While Life Lasts. – "Denys Watkins-Pitchford".

Farlows in the Field

Caught by the River